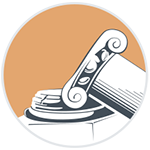 «I love this Greece all over. It bears the colour of my heart.
Wherever you look a joy lies buried»

Friedrich Hölderlin, Hyperion or the hermit in Greece, 1797

The phenomenon of Neoclassicism from the mid 18th century attracts again the interest of the travellers to Greece of classical antiquity: antiquarian travellers study in situ the original Greek monuments, often lying in ruins, while artists make drawings of them, realistic or imaginary, and present them to the European public in paintings, engravings and illustrated editions.

At the same time, they make known to the West the situation in the Greek area and express the demand for freedom of the Greeks, as continuation of their glorious ancestors. In that sense, archaeolatry will constitute an early stage of Philhellenism, based on the classical European education and love for ancient Greece.

As approaching closer to the Greek regeneration, the travellers increase, coming from more and more countries, the same stands for their publications too, while their contemporary Christian Greeks, who live under the Ottoman yoke, obtain progressively a bigger part in the depictions and descriptions of Greece. By the early 19th century, influential writers (such as Byron and Chateaubriand), eye-witnesses of the Greek reality, state clearly the issue of the liberation of the Greeks.