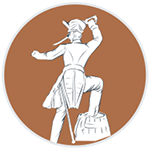 There follows a succession of representations that bring to the fore the outside diplomatic interventions in the Greek cause. The first depicted event is the signing of the treaty of London (6 July 1827): with protagonist the British Prime Minister, George Canning; the Great Powers (England, France, Russia) decide the pacification in Greece, proposing to the Sultan Mahmud II the granting of autonomy to the Greeks with the payment of dependency tribute.

The Treaty contained a secret complementary article, which proved to be decisive: in case the Sublime Porte did not accept the conditions within the space of a month, the agreeing powers would immediately take the necessary measures to impose truce. And this was done: after the rejection of the Treaty by the Sultan, the three-nation allied fleet, under the admirals de Rigny, Codrington and Heyden, vanquished on 20 October 1827 the Turkish-Egyptian forces in the gulf of Navarino, paving the way for the successive outcome of the Greek cause.

On 3 February 1830 the Protocol of London is signed, known also as Protocol of Independence.