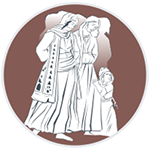 «What if we are few before the crowd of Ibrahim, we console ourselves in some way,
that fate has the Greeks always few»

The only representations of the Frieze that are differentiated from the prevailing victorious ambience are the «Ravaging of the Peloponnese by Ibrahim» and the «Personification of the city of Missolonghi».

It is the dark period of the civil strife, which almost condemned the Struggle to failure. On one side the notables, who in the pre-evolution period possessed wealth and authority, and on the other side the chieftains, who proved themselves in the battlefields, claimed the share they deserved in public affairs. Added to the equation of the sharing of power are also the Phanariots, taking the side of the notables, while members of the Society of Friends, as Dimitrios Ypsilantis, sided with the military men. Finally, contrasts of localism were not missing, as between the inhabitants of Central Greece (the Roumeliots) and the Peloponnesians.

At the same time that the Greeks are devastated by civil strife, Ibrahim and his troops ravage the Peloponnese and advance to Missolonghi, where Kioutachis, already since April 1825, has laid siege to the city. The blockade by the Turkish-Egyptian forces is excessive. Famine and diseases decimate the population. Aid is delayed. Missolonghi and its inhabitants experience dramatic hours. The besiegers demand the surrender of the city, receiving the brave refusal of the besieged to succumb to the disgraceful conditions. In the end, in the night of the 10th to the 11th of April 1826, the inhabitants of Missolonghi enact a heroic Exodus from the walls of the city, conquering through their death immortality.