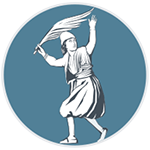 On 14 April 1827, the Third National Assembly of Troezen elects Ioannis Kapodistrias as first governor of Greece. His reception on Aegina, on 11 January 1828, is nationwide and glorifying.

One of the first actions of Kapodistrias was to ask for the suspension of the Constitution of Troezen and the establishment of a new administrative formation, the Panhellenion, which would be in place until the summoning of a new National Assembly. From then on, the Greek State constituted a Presidential Democracy, with expanded jurisdictions for the Governor.

Kapodistrias immediately occupied himself with creating from scratch institutions and infrastructure: founding of the National Financial Bank and issuing of currency, creation and staffing of courts, re-organization of the armed forces, reconstruction of the educational system, but also enhancement of the agricultural production, are only few of the innovations he introduced. However, the conflict with established interests and the exacerbation of passions did not allow him to complete his work. On 27 September 1831, the Governor is assassinated in Nafplio.

In the next representation of the Frieze, the historical narrative deals with the search for ruler: Ludwig introduces Otto to the Greek envoys in Munich, A. Miaoulis, K. Botsaris and D. Plapoutas. On 27 July 1832, the plenipotentiaries of the Greek nation ratify the election of the second-born royal child of Bavaria, as king of Greece. There follows the triumphal entry of the mounted young king in Nafplio (6 February 1833).

The narrative of the Frieze in the Hall of the Trophies comes to an end. The life of the neo-Hellenic state was just beginning.