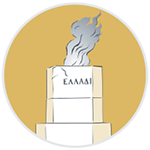 Right from the outbreak of the Revolution evident was the need to establish a central administrative authority, which would undertake the coordination of the Struggle as well as the political and administrative organization of the liberated areas.

In that direction, the local and peripheral administrative organizations are replaced by the National Assemblies, with wide representation of plenipotentiaries from the revolted areas. In these take part notables, chieftains, representatives of the clergy, but also Phanariots and intellectuals, composing a variegated mosaic.

In the Frieze of the Hall of the Trophies it is depicted archetypically the voting of the Provisional Regime of Greece by the First National Assembly, a milestone in the political history of modern Greece, that established constitutionalism as the fundamental criterion of political legality. The said Constitution was revised by the Second National Assembly of Astros as Law of Epidaurus, while in May 1827, the Third National Assembly voted the Political Constitution of Greece, which for the first time declared the principle of popular sovereignty. Then, by a decree it elected Ioannis Kapodistrias as «Governor of Greece» for seven years.