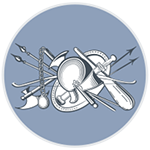 Great Oath of the members of the Society of Friends

From 1814 the members of the Society of Friends prepared the armed struggle of the Greeks for independence. Having as starting point the city of Odessa in Russia and as pioneers Nikolaos Skoufas, Athanasios Tsakalov and Emmanuel Xanthos, this secret organization acted under the watchful eye of the Ottoman administration and the European authoritarian regimes. Aliases, a cipher (cryptographic alphabet) and secret symbols, all carried the same revolutionary message: «Freedom or Death».

Soon annexes of the Society were set up in many cities of Russia, the Danubian Principalities, Central Europe and Constantinople. After 1818, the members of the Society of Friends began also to visit the local Greek communities and recruit new members. So, on the eve of the Revolution, the initiated were in their thousands. All was ready for the uprising.