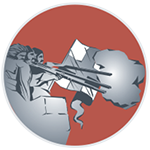 The consolidation of the Struggle

«Indeed you appeared as another Leonidas, who withstood horrible war
at Thermopylae, Your valour at Dervenakia
with eight hundred men you confronted thousands of enemies».

The year 1822 began with the atrocious massacre by the Ottomans of tens of thousands of Greeks on Chios (30 March), an event that shocked the European public opinion, turning it gradually in favour of the Greek cause.

The Revolution had begun to enter its phase of consolidation and the Europeans are convinced about the just demands of the Greeks: the burning of the Turkish flagship at Chios by Konstantinos Kanaris (6 June 1822), in retaliation for the massacre of the Chians, and the prevalence of Theodoros Kolokotronis’ troops over Dramalis at Dervenakia (26-28 July 1822) feature among the important successes of the revolted.

In December 1822, Alexandros Mavrokordatos and Markos Botsaris manage to defend the city of Missolonghi against the forces of Omer Vrioni and Kioutachis, on the land, and Yusuf Pasha, at sea, by delaying the negotiations for the surrender of the city. In the end, on 31 December the besiegers decide to lift the siege.

This important success was followed in the space of a few months (8-9 August 1823) by the heroic death of Markos Botsaris, in the battle of Kefalovryso at Karpenissi.

The enthusiasm of the victory and the grief for the loss were on the agenda of the Struggle for Freedom.